… And I don’t just mean they think I am mean or unfair.

It started with a student who thought it was cool to draw Swastikas on my desks. High schoolers are weird.

The first time it cropped up, it was a tiny little Swastika. I was faced with the dilemma: Make a big deal out of it and risk goading the Nazi in my class to continue, or just let it slide and hope the perpetrator will get bored after their graffiti failed to incite. Apparently, “letting it slide” only ensured that the Swastikas got bigger and more noticeable. Teacher Fail.

I started reading The Scarlet Letter with my juniors, and we were in the middle of an interactive discussion that involved me standing on a desk so I could see all of my students and command their attention. The question arose: “Is our Nation still based on religious principles like it was when the founding fathers created the Constitution?”

“What do you mean, Penrod?”

I tried to rephrase the question. “Like our flag, and when we say the Pledge of Allegiance,” I gestured to the flag which was in the upper right part of my classroom. I was holding my lesson plan in my left hand, so I indicated with my right.

“…How it says ‘One Nation Under God’…Why are you all looking at me so weird?”

Then Kendon* gives a sly smirk at my hand, which is still extended pointed at the flag.

“Maybe you ought not to use your hand like that.”

I draw my eyes in horror to the full-on “Heil” I’ve inadvertently got going on while the class bursts into hysterical laughter. I pull my hand down, and yank the lesson plan over my face to hide my blush.

I apologize repeatedly, promising it was completely unintentional (it was), and after a few more jokes and a minute of laughter, I am able to get the class back on track.

Here’s the thing: I am teaching The Book Thief to my Freshmen right now. It is a book about Nazi Germany. It is a book that portrays the humanity of the Germans in such a poignant, beautiful way. It shows the German people revolting, standing up to Hitler. It also portrays people that support him, but the book’s predominant message is actively against Hitler and his countless atrocities.

In an effort to get my freshmen to understand why something as terrible as the Holocaust could happen, and in order to help them understand that humanity still existed–even in Nazi Germany–I gave them a little background information on WWII. Which means that I had to discuss Hitler. My husband suggested that we watch a 30 second Youtube clip of Hitler speaking to understand what a gifted and persuasive orator he could be, why the Germans might have been duped into following him.

…Unfortunately, I accidentally left this window up on my computer, so as I am transitioning into a powerpoint on Puritan History for my juniors, they happen to notice when I go into “Hot Corners” a nice little video of Hitler speaking. 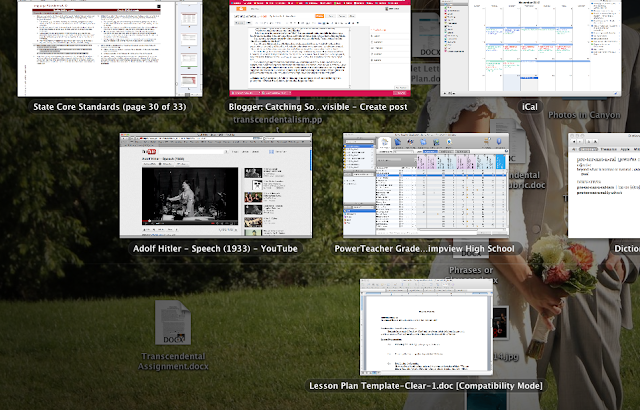 Kendon* about loses it.  The whole class is practically crying at this point, as I desperately grab my copy of The Book Thief, wildly insisting that I am not a Nazi, that we are reading “Anti-Nazi” Literature. My attempts are thwarted by an ill-timed yell from the back.
“Look at this! There’s a swastika on this desk! PENROD!”

Deal. Sealed.
As far as my first period Juniors are concerned, I am a Nazi.
*Facepalm*

*Dear Reader, you know me better than this, but nonetheless I feel the deep and heartfelt need to defend myself: I am not, nor have been, nor never will be a Nazi. Case Closed.