Maybe it’s not the moment to slip into my itty bitty box.

If you read my last post, you know that I’m currently grappling with the intellectual quandary of my own voice. It’s not that I don’t have things to say; it’s just that there are so many of me saying the same thing, and how valuable is that? Or how valuable is one voice with imperfect knowledge? How valuable is one with a spotted record?

And it’s not (exclusively) a lack of self- esteem as much as a wonder about letting other voices be heard rather than injecting my limited one into the conversation. Where can I elevate? Where can I amplify? Where can I listen and learn?

Of course, there’s that terribly self-centered part of myself that looks at Tuesday’s tragedy in Atlanta and thinks wildly: “You should have said more sooner!” As though I could have somehow spoken something to the internet that would magically reach the white terrorist who targeted an Asian female community in a mass shooting, purportedly because of a “bad day.” That’s some internalized white saviorism right there. It’s also… too heavy a mantle for one person. It’s both things. As many things are.

At work, we’re creating a unit of study on the Holocaust. I can’t say more than that for proprietary reasons, but I can say I’ve been wading for months into Holocaust research, and finding new and expanded chasms opening up within me as I explore the depths of human evil. And I’m reading about the measurement of silence, and the rhetoric of fear, and the impact of onlookers looking the other way in the face of bigotry that evolves, unchecked, into full blown oppression. And I’m reading about how, in large part, the obligation to bear witness to what happened has fallen on the victims, not the perpetrators, and definitely not enough on the bystanders.

The Holocaust is so bad, obviously. But digging deep into it has made me understand just how bad in a way that makes me want to creep into my box, slide the lid down, and rock back and forth a little. But I keep thinking about the bystanders.

I wonder if my self-consciousness and fear of getting things wrong, or fear of centering myself, or fear–if I’m honest– of losing social capital, is making me into a bystander.

There’s so few ways to get these conversations right, and it has everyone up in arms. People are terrified to be held accountable for the sins of yesterday, so they’re rounding it up into a cancel culture ball and punting the problem over the fence. I guess I get the fear. I’ve said and done ignorant and stupid stuff that I’m ashamed of in my core. And maybe one day I’m in for a public reckoning too. But ok. I said and did stupid stuff. Part of atonement is consequences. Accepting them. Feeling them. Feeling sorrow. Learning more. Doing better. Speaking up.

Isabel Wilkerson writes in her prologue to the book, Caste, about a man in a crowd of Germans who is folding his arms while everyone else is heiling Hitler. 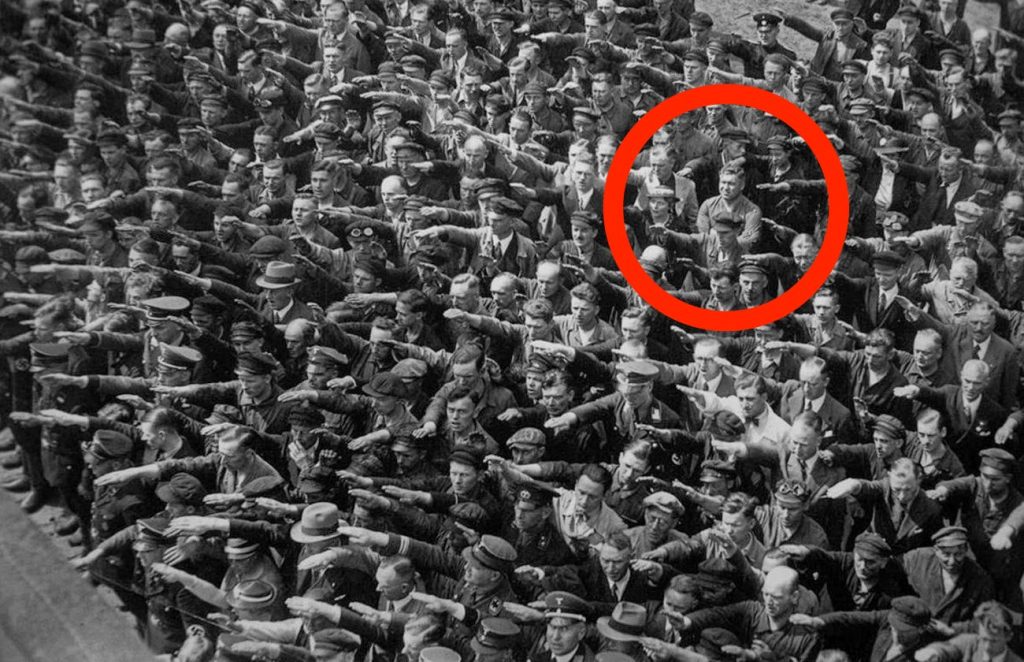 Not because he did anything momentous individually, but what if everyone else in that crowd did the same thing?

I’m realizing I need less and less my voice to matter as an individual, but an actual role I can play is part of a collective. A collective that isn’t just performing racial justice on social media (which is easier to do than actually dig in—and it’s something I worry about all the time). It’s a collective of words and thoughts and deeds that matter in the face of bigotry. It’s a collective attempt to stem the tide of oppression. Certainly the deluge of resources on Anti-Asian racism has been a service to me as I’ve built bridges over my own knowledge gaps for the last few months. Building my own knowledge is both insignificant and deeply significant at the same time—if I’m part of a well-meaning collective.

I’m realizing that my opinions are never absolute. And that as I grapple with my own voice in this very blog post, I may be centering my experience without advancing the more critical voices of victimized communities. I may decide that more deeply tomorrow.

But today is not a day for boxes. It’s a day for linking arms and marching forward. Not as a lone individual, but as a collective saying “Stop Anti-Asian Violence. This is not ok.”

Donate (here and above):
Support the Cause Against Anti-Asian Violence
Victims of Violent Crimes in the Bay Area-Note that this money goes to the elderly victims in SF, who have been violently attacked recently as Anti-Asian racism is on the uptick. This does not go to the victims in Atlanta.

THIS IS NOT AN EXHAUSTIVE LIST. Please feel free to add any causes you might support in the comments, as well as resources or Instagram handles that you’ve found educative.