Skip to content
I wouldn’t ordinarily blog about this so candidly, except that I love the candid and real people out there. I love the people that share without asking for pity. I love the people that post pictures of their perfect little cupcakes one week, and then their disaster of a house the week after that. So in an effort to be relatable and, frankly, for a little catharsis, I give you….
It’s not a secret—I’m high-strung. Mind you, this particular life fact isn’t something I often, if ever, publicly broadcast, but if you knew me in high school and saw me through planning a high school dance or finals season—you probably knew.

And in college, during a break up, or a new life transition, or crashing a roommate’s car, you probably noticed: I’m high strung.

But it’s a little bit more than being simply “high-strung” or “high maintenance” or even “highly motivated.” Really what it is, is that I am highly anxious.

I wish I could draw evocative little pictures that eloquently and relateably describe my—what—condition? (I hate how clinical that feels. Like bring me the straight jacket now, why don’t you?) the way Allie Brosch describes depression. But I don’t have pictures; I only have words. I also do not have depression, but its close and less than amiable sister-in-law: Anxiety.

And when I am absent from the blogosphere, it’s largely because I’m entrenched in a difficult battle with stress. I’m knee-deep in a quicksand, and the most stressful part of the whole experience is how fast I’m sinking and how far away a rescue rope seems to be.

The first time I remember having a panic attack was at my sister’s college graduation. I was in eighth grade, and my family asked me to go early and save seats for them at the ceremony. I wasn’t early enough, however, and so finding a row that could seat an extended family of twenty was an ordeal.

The auditorium that the ceremony was held in had doors at the entrance of each row. I’d look for rows that were empty, and by the time I navigated the crowds and got through the right door, the row was already filled.
I probably went in and out of thirty doors that day, only to finally save a row big enough for the whole family, and come to find they’d been sitting at the very top of the auditorium for twenty minutes.  I burst into loud, embarrassing, and unrestrained tears that people in the lobby saw. They probably thought I’d cut my finger off—I was howling that loudly.
… And normally, when all social grace would dictate that I restrain, I vividly remember the feeling of NOT being able to turn off the spigot. The adrenaline rushed down my cheeks. It was salty and bitter, and somehow it seemed my adrenaline was also filling my lungs like a balloon because I couldn’t breathe either.
I’m still haunted by the feeling of going in and out of the doors… the doorwells enclosing me, the constant rejection of finding another metaphorical door closed and a row blocked off. That’s what my anxiety feels like. Door after door after door. 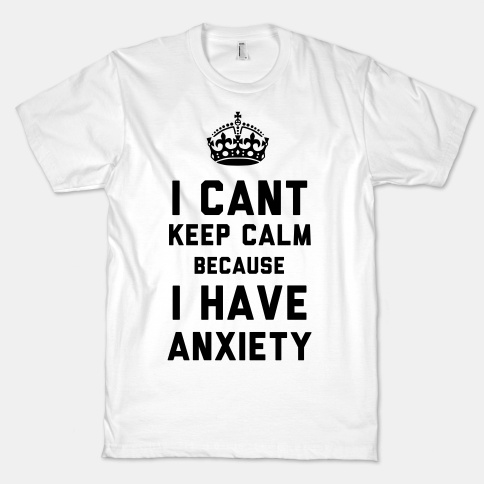